Catalan leader Carles Puigdemont says the Spanish region has won the right to statehood following a contentious referendum that was marred by violence.
He said the door had been opened to a unilateral declaration of independence.
Catalan officials later said 90% of those who voted backed independence in Sunday’s vote. The turnout was 42.3%.

Spain’s constitutional court had banned the vote and hundreds of people were injured as police used force to try to block voting.
Officers seized ballot papers and boxes at polling stations. Spanish Prime Minister Mariano Rajoy said Catalans had been fooled into taking part in an illegal vote.

‘Day of hope’
More than 2.2 million people were reported to have voted, according to Catalan authorities, out of 5.3 million registered voters. A Catalan spokesman said more than 750,000 votes could not be counted because polling stations were closed and urns were confiscated.
“With this day of hope and suffering, the citizens of Catalonia have won the right to an independent state in the form of a republic,” Mr Puigdemont said in a televised address flanked by other senior Catalan leaders. 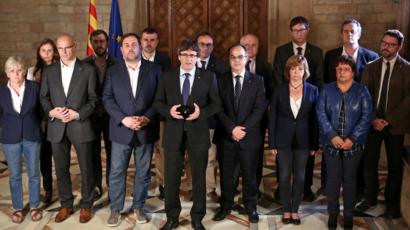 “My government in the next few days will send the results of today’s vote to the Catalan parliament, where the sovereignty of our people lies, so that it can act in accordance with the law of the referendum.”
He said the European Union could no longer “continue to look the other way”.
The Spanish prime minister spoke of a “mockery” of democracy.
“At this hour I can tell you in the strongest terms what you already know and what we have seen throughout this day. There has not been a referendum on self-determination in Catalonia,” Mr Rajoy said.
Large crowds of independence supporters gathered in the centre of the regional capital Barcelona on Sunday evening, waving flags and singing the Catalan anthem. Anti-independence protesters have also held rallies in Barcelona and other Spanish cities.
In another development, more than 40 trade unions and Catalan associations called a region-wide strike on Tuesday due to “the grave violation of rights and freedoms”.
How bad was the violence?
The Catalan government said more than 800 people had been injured in clashes across the region. Those figures included people who had suffered relatively minor complaints such as anxiety attacks.
The Spanish interior ministry said 12 police officers had been hurt and three people arrested. It added that 92 polling stations had been closed. Catalonia’s government disputed this number and said many more had been closed.
In Girona, riot police smashed their way into a polling station where Mr Puigdemont was due to vote, and forcibly removed those inside. He voted at another station.
The BBC’s Tom Burridge in Barcelona witnessed police being chased away from one polling booth after they had raided it.
TV footage showed riot police using batons to beat a group of firefighters who were protecting crowds in Girona.
The national police and Guardia Civil – a military force charged with police duties – were sent into Catalonia in large numbers to prevent the vote.
The Catalan police – the Mossos d’Esquadra – have been placed under Madrid’s control, however witnesses said they showed little inclination to use force on protesters.
Barcelona Mayor Ada Colau condemned police actions against the region’s “defenceless” population, but Spain’s Deputy Prime Minister Soraya Saenz de Santamaria said police had “acted with professionalism and in a proportionate way”.
How much voting took place?
Catalan authorities said 319 of about 2,300 polling stations across the region had been closed by police while the Spanish government said 92 stations had been closed.
Since Friday, thousands of people have occupied schools and other buildings designated as polling stations in order to keep them open.
Many of those inside were parents and their children, who remained in the buildings after the end of lessons on Friday and bedded down in sleeping bags on gym mats.
Catalonia, a wealthy region of 7.5 million people in north-eastern Spain, has its own language and culture.
It also has a high degree of autonomy, but is not recognised as a separate nation under the Spanish constitution.